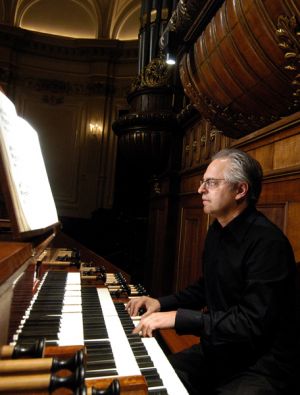 The versatile musician Leo van Doeselaar plays a repertoire comprising of several centuries as an organist, pianist and fortepianist. In his interpretations he strives for the greatest possible purity of style, and he performs on both period and modern instruments. As an organist he has built up a large concert practice in the Netherlands and abroad. He is also a much sought-after pianist, partners Wyneke Jordans in a widely acclaimed duo-piano team, and performs as an accompanist.

As a soloist van Doeselaar has performed with various conductors, including Mariss Jansons, Riccardo Chailly, Charles Dutoit, Claus-Peter Flor, Frans Brüggen and David Zinman. As organist of the Baroque Orchestra of the Dutch Bach Society and titular organist of the Concertgebouw he has regularly performed with renowned orchestras and leading early music specialists.

Van Doeselaar has made several recordings, both as a soloist and as a duo with Wyneke Jordans. He has made the first integral recording of the organ works of Georg Friedrich Händel and Wilhelm Friedemann Bach, and has also made recordings of the works of Mozart, Bach, Krebs, Mendelssohn, van Noordt, Liszt, Franck en Reger on historic organs.