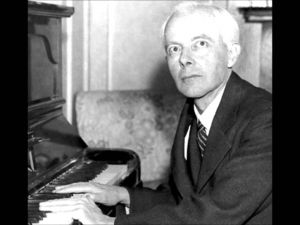 Next to Arnold Schoenberg and Igor Stravinsky, Béla Bartók was a third seminal innovator of European art music at the start of the twentieth century. Bartók, too, sought a way out of the deadlock of tonal music around 1900, and he found it in folk music. Initially, he tied in with the nationalistic tradition of Franz Liszt with his tone poem Kossuth, but eventually he found his own voice with the rediscovery of the music of Hungarian peasants. Together with Zoltán Kodály he was one of the first to apply the results of folkloric research into his own compositions. One major difference between him and composers of the 19th century, was that Bartók did not adjust to the system of tonality, but created his own musical idiom from folk music. Because of this, his composition style was flexible to other musical trends, without having to violate his own view points. For example, his two Violin sonates come close to Schoenberg's free expressionism, and after 1926 his music started to show neoclassicistic tendencies, comparable to Stravinsky's music. Bartók was not just interested in Hungarian folk music, but could appreciate musical folklore from all of the Balkan, Turkey and North-Africa as well.