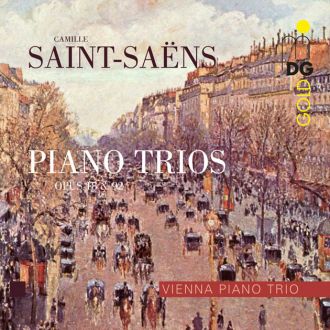 Anniversary Album
For twenty-five years now the Vienna Piano Trio has triumphantly toured concert stages around the globe, and on these travels Beethoven has been a constant companion – with all his dynamic extremes and ultimate challenges. In honor of the ensemble’s anniversary, MDG is releasing a new recording of the two Trios op. 70 and the Kakadu Variations on this Super Audio CD’s rich program: crystal clear, audiophile, and with the charm of a live performance captivating listeners from start to finish!

Romantic Ruffian
When Beethoven was asked why he had composed his two Trios op. 70 in 1809, he responded rather gruffly (as was quite typical of him), “Because there is a lack of them.” For his part, E. T. A. Hoffmann first discovered the “romanticist” Beethoven in these works. This is hardly surprising, given the fact that the three instruments shoot off like rockets, and this impetus charged with high suspense surges over into an energy-laden cello tone, which then magnificently introduces the grand theme. The initial measures of Beethoven’s “Ghost Trio” offer the greatest possible contrasts in character and thus transcend the conventions of the times with genuinely romantic flair.

Monumental Mystery
The monumental “Largo assai ed espressivo” is shrouded in a mysterious atmosphere; it creates a genuinely ghostly mood with its enigmatic tremolos in the piano and pale unison in the strings, while its spine-tingling tone colors and amazing dynamic shadings hold listeners spellbound. The concluding “Presto” has what it takes: with great virtuosity, accentual propulsion, and intensive fermatas, it summons the musicians to a supreme challenge and leaves audiences open-mouthed in amazement – this too is typical of Beethoven.

Cosmic Creation
Even if it may seem a bit silly to our ears today, the variations on “Ich bin der Schneider Kakadu” are among Beethoven’s greatest achievements in the field of chamber music. The introduction immediately reveals a cosmos of musical expression. The entry of the simple theme creates an absolutely grotesque impression and is based on a very lascivious and risqué text. Beethoven sets in motion a series of surprising insights (some of them from an ironic perspective) into precisely this theme and produces a suspenseful development right through to the finely crafted fugued finale! A welcome task for the Vienna Piano Trio, which spreads enthusiasm with its impressive range of tone colors, dynamics, technical brilliance, and expressive will.