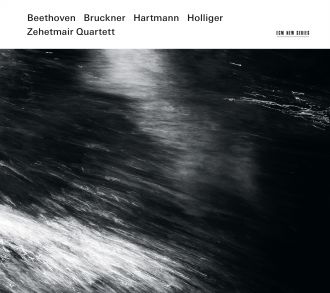 The Zehetmair Quartett, one of the most exciting and accomplished string quartets of our time, plays a programme of characteristically broad reach, extending from Beethoven to Holliger.

This 2-CD set is drawn from two recording sessions, both made at Zürich DRS studio. Beethoven’s F Major quartet, Bruckner’s C minor quartet and Holliger’s 2nd string quartet were recorded in April and May 2010. The Hartmann Nr. 2 was recorded in 2002 by an earlier quartet line-up, and this interpretation is previously unreleased. It was the last of the Zehetmair Quartett recordings to feature cellist and founding member Françoise Groben (1965–2011). “Her energy and creativity were crucial to our development and early successes, such as the Schumann CD. This new production is dedicated to her memory.”

The double album begins with Beethoven’s highly-concentrated opus 135. The last of Beethoven’s five quartets, written in 1826, it occupies a major position in what many feel to be a unified cycle. Wolfgang Sandner, in the liner notes: “Its traditional four-movement design, its moderate length, the absence of fugal writing and the classically Haydnesque or Mozartian sonata form of its opening movement all make it seem like a backward glance at the beginnings of the genre in Beethoven's music.” It is concentrated on the most essential elements, Thomas Zehetmair and Ruth Killius observe. But in its contrapuntal rigor, its thematic variety, its polyrhythms and energetic intervallic leaps it remains as challenging as any of Beethoven’s late quartets.

Bruckner’s C minor quartet, described by the performers as “touchingly warmhearted”, was written in 1862 as a student exercise when the composer was taking orchestration lessons from Otto Kitzler. The manuscript was rediscovered in 1950 in Munich and received its premiere there in 1951.

Hartmann’s second string quartet is in Zehetmair’s view, one of the 20th century’s most important quartets – “a large scale, nostalgic drama, full of wisdom”. Wolfgang Sandner: “The Second String Quartet is a piece of unmistakable consistency and rigour, a piece remarkable for its accuracy of statement, the weight it sets aside for each and every note, the balance it strikes between line and sonority, and especially its sense of formal architecture and awareness of a tradition stemming from Bach and convulsed by Beethoven. ... Above all it receives its ironclad structure from the Bachian counterpoint that Hartmann intensively studied, both in the original and in its impact on Anton Webern.”

Heinz Holliger’s Streichquartett Nr. 2 – described by Zehetmair as an “explosion of fantasy” – is at 24 minutes the longest work heard here, and it brings the Quartett’s programme to a powerful and event-packed conclusion. Commissioned for the Zehetmair group who premiered it in Cologne in 2008, the work is dedicated to Elliott Carter. The late US composer was fascinated by its texture, which treats the four instruments as a world of expressive sound in constant flux. Holliger admits that he returned to the string quartet format with considerable trepidation: “There is hardly another musical genre which is so burdened by its history as the string quartet. Whoever composes for this instrumentation inevitably senses the skeptical and critical stares of the great composers. This can have a paralyzing and intimidating effect. Perhaps this is the reason why I have only now dared to rise once more to the great challenge, 34 years after my much criticized 1st String Quartet.”

So in all and in every way I would call this Zehetmair Quartet set a triumph. The fine attention to detail, the brilliant sound staging of the audio, the dedicated and glowing readings, the unique program--all make for a landmark recording.

So in all and in every way I would call this Zehetmair Quartet set a triumph. The fine attention to detail, the brilliant sound staging of the audio, the dedicated and glowing readings, the unique program--all make for a landmark recording.