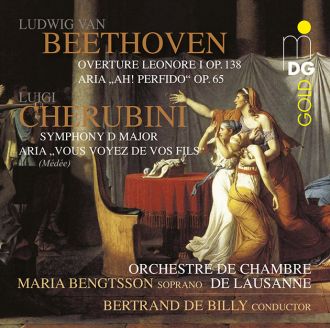 Since Cherubini composed his symphony for London, we should not be surprised to find the late Haydn peering around the corner now and again.  Maria Callas successfully lent her support to Cherubini’s Medée, and ever since it has been one of his greatest stage hits. His contemporariesthought that the work was too long. He thereupon blotted out five hundred measures that were first reconstructed in 2013, with help from the most advanced x-ray technology. “Vous voyez de vos fils” is one of the all-time great moments in the
opera literature, and Maria Bengtsson gives us the opportunity to experience the whole emotional spectrum of the title heroine’s suffering.

A stunning addition to MDG's 2 2 2 surround sound technology on SACD.