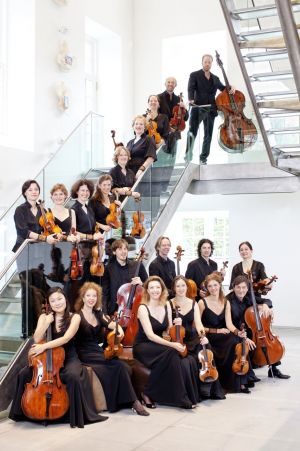 Amsterdam Sinfonietta is the only professional string orchestra in the Nederlands. The orchestra was founded as Nieuw Sinfonietta Amsterdam in 1988 by musicians with a special passion for chamber music, with Lev Markiz as their artistic director. Their aim was to create a chamber music ensemble that is able to achieve the highest level of music making. Even in their first concerts the ensemble proved to be able to realize their goal, which was confirmed by reactions from the press and the audience. Since then it occupies a unique position within Dutch musical life.

Currently the orchestra is led by concertmaster and artistic director Candida Thompson. The orchestra plays without a conductor, which calls for an extremely intense degree of involvement from the musicians, who therefore play at the level of soloists.

The repertoire of Amsterdam Sinfonietta ranges from Baroque to contemporary music. Alongside performances of mainstream repertoire, the orchestra frequently champions unjustly neglected or new works by composers such as Sofia Gubaidulina, Michel van der Aa, Pēteris Vasks and Sally Beamish.

Amsterdam Sinfonietta has worked with internationally renowned musicians such as Barbara Hannigan, Sol Gabetta, David Fray, Janine Jansen, Jasper de Waal and Martin Fröst. It has toured to amongst others Spain, France, Germany, Italy and the United States.