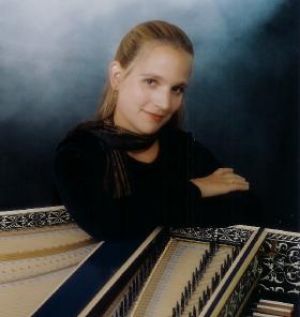 Harpsichordist and fortepianist Kathryn Cok was born in the city of New York, USA. She now lives in The Hague, Holland where she completed a Masters degree at the Royal Conservatory as a student of Ton Koopman and Tini Mathot on the harpsichord, and Bart van Oort on the fortepiano. Kathryn recently won first prize in the first solo competition for baroque instruments in Brunnenthal, Austria. She has worked with the Amsterdam Baroque Orchestra, Musica Ad Rhenum, and other important early music ensembles in Europe and performs regularly as a soloist in many of the world's most renowned Early Music Festivals and important keyboard collections. She is an active member of the English cornett and sackbutt ensemble Quintessential, and is co-founder of the Anglo-Dutch ensemble Het Caecilia-Concert, a dynamic international group of four instrumentalists specialising in performance and research of 17th century music for instruments and voices, and the Etesian ensemble, performing works for piano and winds by Mozart, Beethoven and their contemporaries.In addition to her activities as a performer, Kathryn is busy as a researcher, and was recently made a fellow of the Scaliger Institute of the University of Leiden, where she compiled a catalogue of printed music up until the year 1800, found in the University Library's collection. She is also pursuing a PhD at the University of Leiden in the docARTES program.