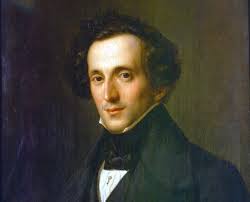 Mendelssohn is often compared to Mozart. Both of them were child prodigies, both had a talented sister and they both died at a young age. Mendelssohn, who as a child also painted wrote poetry, was born in small family which converted to christianity from judaism. As a composer he preferred looking back, rather than forward: his main examples were Bach, Handel and Mozart. It was Mendelssohn who retrieved Bach from oblivion and pushed for a revival of his music, which still lasts today. One century after its premier, Mendelsson performed the St Matthew Passion for the second time ever, in 1829.

Three years, earlier, on his 17th, he had already composed his masterfully overture A midsummer night's dream op. 21, based on Shakespeare's play. Today, it is still considered as one of the absolute masterpieces in all of the orchestra reperoire. His Violin Concerto op. 64 belongs to the most beautiful works of the 19th century as well. During his travels through Europe, he wrote his brilliant Italian Symphony, Scottish Symphony and the overture The Hebrides.

Although Mendelssohn had a prosperous career, his weak physique made him emotionally vulnerable. The death of his favourite sister Fanny became fatal: Mendelssohn died in the same year, at the age of 38.