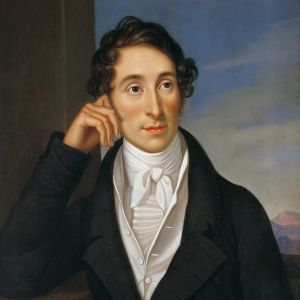 Carl Maria von Weber was a German composer, conductor, pianist, guitarist and critic, one of the first significant composers of the Romantic school.

Weber's operas Der Freischütz, Euryanthe and Oberon greatly influenced the development of the Romantische Oper (Romantic opera) in Germany. Der Freischütz came to be regarded as the first German "nationalist" opera, Euryanthe developed the Leitmotif technique to an unprecedented degree, while Oberon may have influenced Mendelssohn's music for A Midsummer Night's Dream and, at the same time, revealed Weber's lifelong interest in the music of non-Western cultures. This interest was first manifested in Weber's incidental music for Schiller's translation of Gozzi's Turandot, for which he used a Chinese melody, making him the first Western composer to use an Asian tune that was not of the pseudo-Turkish kind popularised by Mozart and others.