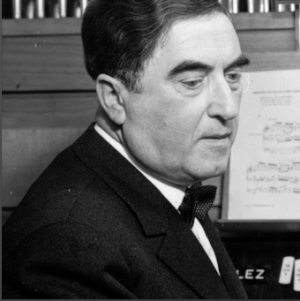 Maurice Duruflé was a French composer and organist, who wrote chamber music and works for choir, organ and orchestra. He was also organist of Saint-Étienne-du-Mont in Paris, professor of harmony at the Paris Conservatory, and formed a famous organ duo with his wife  Marie-Madeleine Chevalier.

Duruflé published only a handful of works, because he was highly critical. He was not easily pleased, and often continued to edit and change pieces after publication. The result of this perfectionism is that his music tends to be well polished, and is still frequently performed in concerts around the world, especially his organ music.

Duruflé's works are reminiscent of impressionism, and are characterized by clarity, poetry and a clear design. Besides, Gregorian chant is an important source of inspiration, which is evident from the use of medieval modes. For his most famous work, the Requiem, Duruflé took the Gregorian mass of the dead as his point of departure, and combined it with the structure and optimism of the Requiem of Fauré.
Share
Tweet