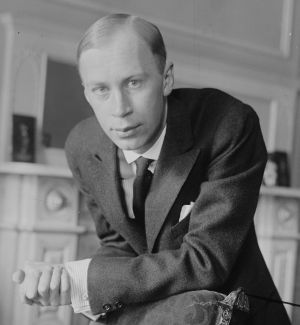 Sergei Prokofiev was born in the countryside of Ukraine. He studied from 1903 at the conservatory of St Petersburg, under Nikolai Rimsky-Korsakov and Anatoli Liadov among others. He was educated as a composer, pianist and conductor. Initially, he made a name for himself as a pianist. In 1918, he left the Soviet Union for the USA, but wasn't able to succeed, and he decided to move to Paris in 1920. His concert tours brought him back to the Soviet Union in 1927, who lured him back for good in 1936. Prokofiev died in march 1953, on the same day as Joseph Stalin.

Prokofiev is considered as one of the greatest Russian composers of the twentieth century, even though he wasn't a great innovator. He generally applied the strict classical forms and structures to his works and focused on a classical tonality, with a few exceptions of expressive dissonants and incidental bitonality. Yet, he is only explicitly neoclassicistic in his popular 'Classical Symphony', his first symphony composed in 1917. Many of his works show his humour, while his later works presented his darker, more serious side.

One of his best known works is the musical fairytale Peter and the Wolf, which is popular among children all over the world.