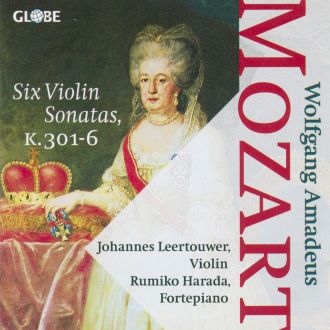 This is the first album with the complete set of the six so-called Palatine Sonatas for Piano and Violin by Mozart. These works take their nickname from Mozart dedication of these pieces to the Electress of Bavaria, Elisabeth von der Pfalz, whose picture is on the cover of this album. The Sonatas were written in 1778 in Mannheim and Paris and they are the first works of this kind in history, in which the violin no longer plays second fiddle to the piano, but is treated as an equal partner. These sonatas are performed here on historically correct instruments with a fortepiano of the kind that the composer himself had at his disposal at the time of their composition. Both the performers have an outstanding feeling for the historical style, combined with a healthy sense of musicianship, which make these performances very stirring indeed. A most enjoyable album with rousing performances, captured in a glorious sound frame, which will stir the heart of every Mozart lover.

Johannes Leertouwer was born in 1959 and started playing the violin already at a very early age. While still studying at the Amsterdam Sweelinck Conservatory, he took part in the National Oscar Back Violin Competition of 1983, where he was awarded the coveted Elisabeth Back Prize as well as the Buma Award, the latter for best performance of the obligatory contemporary work. This enabled him to continue his studies with Josef Suk in Vienna and Prague, for which he also received a grant from the Dutch ministry of culture. He concentrates nowadays mainly on chamber music, appearing in recitals and ensemble concerts all over Europe, striving for authentic performances on historic instruments.

Rumiko Harada started her piano studies at the age of three in Fukuoka, Japan and went to study with Kiyoto Tanaka at the famous Toho-Gakuen Conservatory in 1976. In 1983 she moved to Paris to continue her studies with Patrick Cohen, after which she decided to specialise in chamber music with authentic instruments. Rumiko Harada lives in Mallorca, Spain, from where she undertakes concert tours Europe, Japan and the United States.