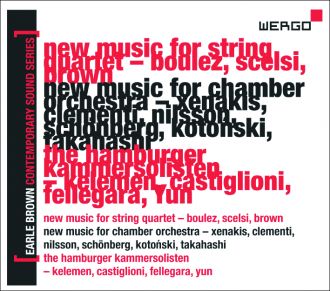 The 18 LPs of Earle Brown's legendary Contemporary Sound Series, now re-released by WERGO on CD (six 3-CD sets), have become a rarity in great demand. “Earle Brown – A Life in Music – Vol. 4” is the most recent CD set in this unique series presented by WERGO.

CD 2 focuses on works for chamber orchestra by Iannis Xenakis, Aldo Clementi, Bo Nilsson, Wlodzimierz Kotonski, and Yuji Takahashi; apart from them, the first recording of Arnold Schoenberg's “Drei Stucke” [“Three Pieces”] is outstanding as well. The works were performed by the International Kranichsteiner Kammerensemble under the direction of Bruno Maderna, the Hamburger Kammersolisten under the direction of Francis Travis, as well as the exceptional violinist Paul Zukofsky.