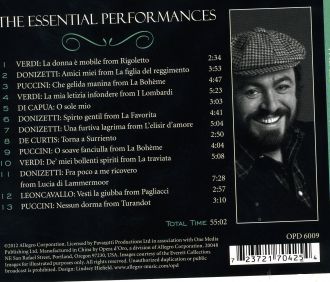 This disc contains an overview of some of Pavarotti’s most famous and beloved recorded opera arias and songs, opening with a universal favorite,
“La donna è mobile” from Rigoletto, followed by “Amici miei” from Donizetti’s comedy La figlia del reggimento. This aria brought down the house at Pavarotti’s Metropolitan Opera debut in 1972. Having delivered nine faultless high Cs in this one impossible aria, he received a record 17 curtain calls.

“Che gelida manina” from Puccini’s La Bohème shows Pavarotti in one
of his signature roles; it would remain a standard throughout his 40-year career. The disc also features selections by Donizetti, Verdi, and Leoncavallo, climaxing in “Nessun dorma” from Puccini’s Turandot, which he had sung at the World Cup in Italy in 1990.