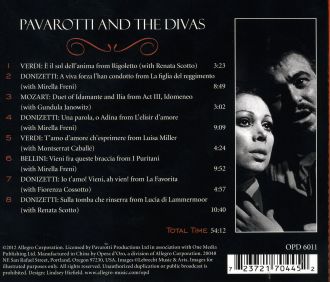 Pavarotti and the Divas

This disc presents Pavarotti in duets with several of the great ladies of opera. Renata Scotto was noted for the beauty of her voice, her intelligence, and total immersion in the Italian operatic idiom. Pavarotti had sung Rigoletto with her in Florence in 1966, as heard here, and a year later Lucia di Lammermoor in Turin, again represented on this disc. One of his great early triumphs onstage occurred opposite Scotto in Rome in 1969, and she would remain a frequent colleague throughout the years.

Also on this disc, Mirella Freni is heard in characteristic selections from operas by Donizetti and Bellini. German soprano Gundula Janowitz is a perfect match in Mozart’s Idomeneo, and the disc is rounded out with duets with the legendary soprano Montserrat Caballé in Verdi’s Luisa Miller, and the great mezzo Fiorenza Cossotto in Donizetti’s La Favorita.