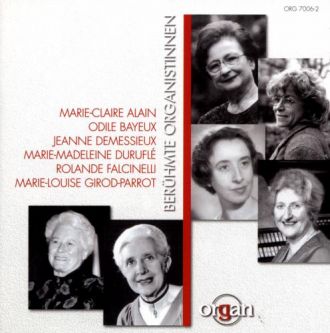 Though the word music is feminine in all languages in which words have genders, the profession of the church organist has been overwhelmingly dominated by men up to the present day. Despite this prohibitive bias, the twentieth century has had a number of women who are internationally renowned concert organists. All of the recordings published on this ORGAN-CD, including some recordings from historical archives, exclusively feature female performers who have become known and celebrated well beyond the borders of France and who have achieved a superlative artistic level on the organ, their concert instrument of choice.