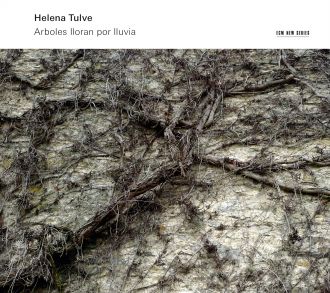 The five compositions heard on Arboles lloran por lluvia give deeper insight into the unique sound-world of Helena Tulve, into music nourished by both contemporary and ancient currents. The Estonian composer draws upon a wide-range of inspirational sources. She explores the raw fabric of sound and the nature of timbre in both analytical and instinctive ways, in compositions that are unmistakably her own, yet her work is inclusive – here incorporating aspects of Gregorian chant, melody from Yemenite Jewish tradition, and texts from Sufi, Sephardic and Christian mystic poetry. Strong performances by the soloists, above all soprano and harpist Arianne Savall – featured on “silences/larmes”, “L’Équinoxe de l’âme” and the title track – and the choral, chamber and orchestral forces marshalled by Jan-Eik Tulve and Olrari Elts make Helena Tulve’s second ECM New Series recording a powerful successor to the critically-acclaimed Lijnen.

“Reyah hadas 'ala” (the aroma of the myrtle rises) unites the Vox Clamantis singers with early music group Ensemble Hortus Musicus. In this piece, Tulve incorporates a song of the Yemenite Jews, and a text written by Shalom Shabazi, a Yemenite poet, rabbi and mystic of the 17th century.

In the sparse “silences/larmes” (silences/tears), the ghostly sounds of tuned glasses, played by the composer, provide atmospheric context for the exchanges of voice and oboe. The metaphysical poems sung by Arianna Savall were written by Mother Immaculata Astre, the Abbess of Le Pesquié.

The source for “L’Équinoxe de l’âme” (Equinox of the Soul) is Safir-i-Simurgh (The Calling of the Simurgh) written by Sufi mystic Shahab al-Din Suhrawardi (1155–1191). As liner note author Kristina Kõrver remarks, “The Simurgh is a mythical bird, who feeds on fire and whose nest is on the borderline between the visible and invisible worlds. The illuminated soul, whose elusive nature is revealed in the paradoxes and parables, in the intensive and detail-rich musical material, appears in the dense, throbbing network of instrumental lines as well as in the song that freely and easily yet powerfully floats above them.“

The narrative of the Sephardic poems “Arboles lloran por lluvia” (Trees Cry for Rain) finds its expressive echo in the music. “Formally it tells the story on two levels… it is raining and the raindrops bounce in the vocal lines and spatter in the nyckelharp part. Melodic lines are combined in a quasi-heterophonic texture, performing a sophisticated variation, which emphasises a wish for reunification.”
The musical ideas of “Extinction des choses vues” (The Extinction of Things Seen) are inspired by “Extase blanche”, a text by Jesuit thinker Michel de Certeau.