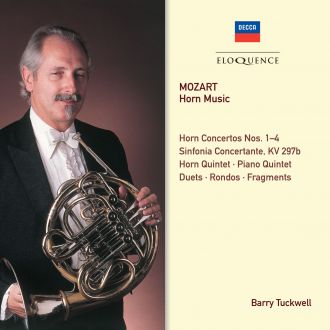 Barry Tuckwell and Mozart are synonymous. He recorded the composer’s works several times during his horn-playing career, beginning with the Horn Concertos recorded with Peter Maag. In July 1983 he recorded them again, directing the English Chamber Orchestra from the horn. The sessions extended to include many of Mozart’s chamber works with horn – the Horn Quintet, the Quintet for Piano and Winds, as well as three of the Duets for Two Horns. Fragments from horn concertos were also recorded, as was the Sinfonia Concertante for winds. In all, nearly two hours and forty minutes of Mozart’s music for horn, performed by one of the greatest living exponents of this music.