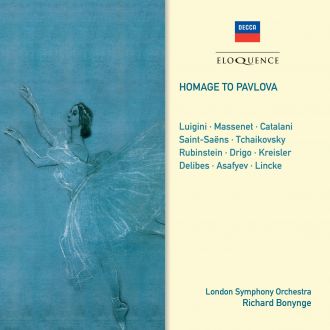 While Richard Bonynge has long been associated with opera, particularly with that of the Bel Canto age, he has been one of the most active revivers and conductors of ballet in the 20th and 21st centuries. His recordings of the major Romantic classical ballet scores have been critically acclaimed, but he has also been responsible for making – often – the single recording of many ballet masterpieces that disappeared from view, and in doing so, showing just how worthy was their revival. There were three classic ballet ‘bon-bon’ LPs he recorded in the 1960s – Homage to Pavlova, Pas de deux and The Art of the Prima Ballerina. All are now reissued on Decca Eloquence.

Homage to Pavlova, a lavish 2-LP set, here appears as per the original LP coupling, with illustrations and detailed notes. For more than twenty years – roughly between 1909 and 1931 in which year she died – Anna Pavlova’s name was synonymous with ballet for hundreds of thousands who saw her dance but who had never heard of the great, contemporaneous Diaghilev’s Ballets Russes and would not have understood it if they had; and for millions of others who never saw her but for whom her name was a household word. Pavlova’s debut was recorded by Valerian Svetloff, one of the foremost critics of the time with the praise: ‘Slender and graceful as a reed, and as supple, with the ingenuous face of a girl of southern Spain, ethereal and light, she seemed like a fragile and elegant Sèvres statuette … Here was something individual, something that was not learned at school. In the solo variation one already felt something more, something that made it possible for one, without posing as a prophet, to foresee in the youthful dancer a great future artist.’