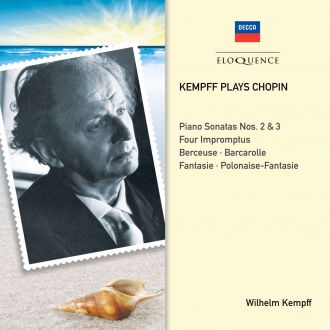 KEMPFF PLAYS CHOPIN: Kempff’s only recordings of music by Chopin were for Decca and then (1950s) as now, they continue to divide opinion. While certainly not of the perfumed variety, Kempff’s Chopin is straightforward while still poetic, gallant rather than passionate. The three original Decca LPs are combined on a 2CD set.

‘some serenely beautiful playing along the way, most notably in the Berceuse, Barcarolle and Ballade No 3 . . .  unaffected, crystalline clarity of thought’ International Piano
‘delectable delicacy in the Berceuse and the Nocturne, likewise in the magic “waterfalls” of the C sharp minor Scherzo and the gracefully streaming right-hand tracery of the Impromptus – all four of them so refreshingly free from drawing-room coquetry.’ Gramophone