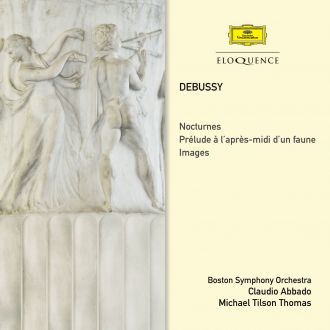 ‘This is the one piece I would like to conduct when I am old,’ reads Claudio Abbado’s entry in his diary, aged eight. He was speaking of Debussy’s Nocturnes. He continues to, and recorded it in 1970, with the Boston Symphony Orchestra, at whose Tanglewood Festival in 1958 he had won the Koussevitzky Prize. It was around 1970 too, that the Boston Symphony (‘aristocrat of American orchestras’) signed with Deutsche Grammophon. The recording was rapturously received by audience and critics. The next year brought more Debussy from the Bostonians, this time with the young American conductor Michael Tilson Thomas. The 24-year-old ‘greyhound lean Tilson Thomas came blasting with electrifying energy in the autumn of 1969’ (Michael Steinberg) as Assistant conductor to a rather depressed atmosphere prevalent at the time in Boston. MTT recorded another of Debussy’s triptychs, Images pour orchestre, in a reading that was clear, crisp and colourful. Together with its original coupling, the Prélude à l’après-midi d’un faune, and Abbado’s Nocturnes, it paints a multifarious canvas of the Boston sound in the early 1970s, and represents a cornerstone of the orchestra’s work with Deutsche Grammophon.

‘a prestige issue if ever there was one ... aural glamour ... the German engineers have done marvels in a new environment at capturing the characteristic Boston sound ... What with a German record company working with an American orchestra on French music conducted by an Italian, it is not surprising that the result is richly cosmopolitan ... The procession in Fêtes is as vigorous and colourful as anything seen in an Italian town’ (Nocturnes) Gramophone

‘Abbado’s account of the Nocturnes is one of the finest in the catalogue ... The playing of the Boston Orchestra is immensely polished but not glossy, and there is a naturalness about this performance that also distinguishes the recording’ Penguin Guide