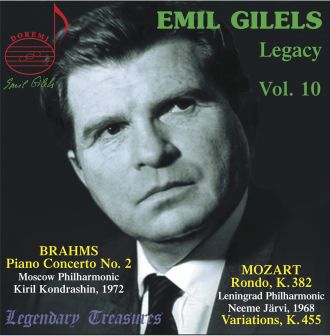 Emil Gilels (1916-1985) was a Soviet pianist, and is regarded around the world as one of the greatest pianists of the twentieth century. Gilels began lessons with Yakov Tkach, a famous piano pedagogue, at the age of five. Gilels later credited Tkach’s strict training as the foundation of his technique. Tkach wrote of Gilels: “… Gilels possesses the abilities of one who is born solely for the purpose of becoming a pianist, and that with the required attention to his development, the USSR would in the future enrich itself with the acquisition of a world-renowned pianist.” Gilel’s great career was truly launched when he won First Prize at the Brussels competition in 1938. He was the first Soviet pianist to perform in the United States during the Cold War era, and he subsequently toured the West numerous times. This is the tenth DOREMI volume of rare Gilels recordings and broadcasts, including Brahms Piano Concerto No 2, Mozart’s Rondo for Piano and Orchestra, and

The winners of Edison Classical 2018 are announced! These prestigious prizes go to albums of a special quality. This Sunday, November 11, some of the Edisons will be handed out during the live broadcast of Podium Witteman on NPO2. We proudly present the winners of our distribution labels: The Debut Laura van ...