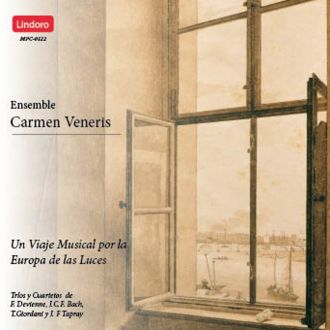 A musical journey through Europe: Trios and Quartets from Devienne, J.C.F. Bach, Giordani and  J.F. Tapray.

Tommaso Giordani was born in Naples in 1730. He was the son of an Italian businessman, singer and librettist and spent the early years of his life travelling all around Europe with his family (the founding members of a small opera company), arriving in England, probably, in 1753. There his family performed at Covent Garden where, on 12 January 1756, Tommaso’s first opera made its debut. The family then moved to Dublin but Tommaso returned to London where he established himself as a composer of opera, oratorios and instrumental chamber music.

Practically all the work of Jean-François Tapray (1738 – 1798) is for the forte-piano and harpsichord, covering the transition period from one to another. He, like most of his contemporaries in Paris, made no significant distinction in style between the two instruments and it is, therefore, pointless to compare his sonatas for the harpsichord with those that include “forte-piano” in their title.