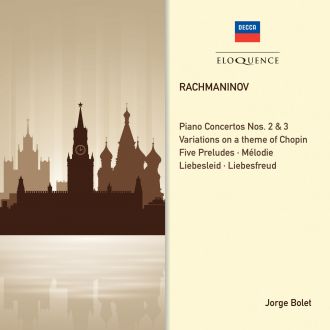 2014 marks the centenary of the birth of the colossal Cuban-born pianist Jorge Bolet. Signed to Decca later in life he made a series of magnificent Liszt recordings, but also recorded music by Chopin, Schumann, Brahms and Rachmaninov. One of Bolet’s own teachers, Josef Hofmann, was the dedicatee of Rachmaninov’s Third Piano Concerto, a work he recorded for Decca, together with the Second, and a series of solo piano works. There were three CDs in all of the music of Rachmaninov and these aristocratic performances are reissued here as a 2CD set. The notes include comments by Bolet on his artistic approach to the Third Concerto.