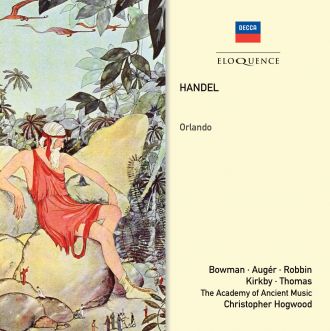 Completed in 1719 and first performed in 1733 Handel’s opera seria Orlando was first performed in 1733 and is widely recognised as one of the eighteenth century’s greatest operas. One of the work’s most acclaimed recordings is that of Christopher Hogwood, with a stellar line-up of Baroque vocal specialists, including James Bowman in the title role and Emma Kirkby and David Thomas. In this recording the orchestral layout is modelled on contemporary illustrations of opera orchestras, with first violins and woodwind in front of the second violins and violas, and with cellos, basses and the two harpsichords placed at the sides. Previously on three CDs, the recording is now reissued as a generous 2CD set.

‘James Bowman’s portrayal of Orlando is both impassioned and intelligent […]Emma Kirkby is perfectly cast in the tragi-comic role of the shepherdess Dorinda […] as unfailingly stylish an account as you’re likely to get’ Gramophone, August 1991