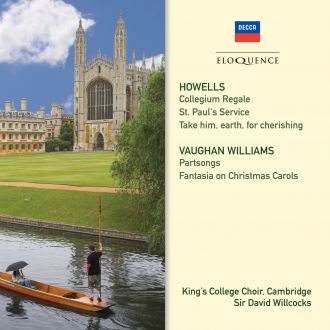 Issued following several requests is Sir David Willcocks complete 1966 LP of Howells choral music originally issued on Argo makes its first appearance on CD. Howells contributes his own notes (reprinted from the original LP) in which he outlines the relationship between each of the settings and the building for which it was intended. It includes two of the Collegium Regale settings (morning and evening services) separated by David Willcoks performing the Psalm-Prelude No. 1 for solo organ. The CD is completed with the first integral issue of the 7” Argo LP of partsongs by Vaughan Williams – The Turtle Dove as well as six Shakespeare settings, also memorably performed by the King’s College Choir under Willcocks in 1959.

‘The recording is of the familiarly high standard’ Gramophone (Howells)

‘This is a record that no admirer of Vaughan Williams can afford to pass by … The choir sing with their customary finesse and the Argo engineers seem to have solved all the problems of combining clear words with richness of tone. Highly recommended.’ Gramophone (Vaughan Williams)