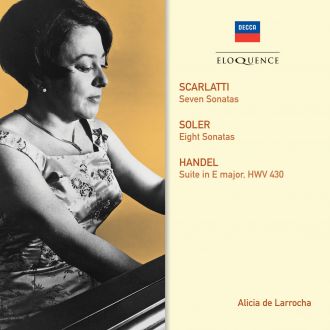 Celebrated for her glorious traversals of 19th and 20th-century Spanish piano repertoire, on this recording Alicia de Larrocha harks back to the Baroque, offering a selection of sonatas by Scarlatti as well as the much lesser-known ones of his contemporary (and her compatriot) Soler. Sandwiched between is her recording of the fifth of Handel’s keyboard suite, with its celebrated ‘Harmonious Blacksmith’ variations. This issue forms part of a survey of Larrocha’s celebrated Decca recordings, with some of them (on this issue, the Scarlatti sonatas Kk. 8 and 10) appearing on CD for the first time. Six of the Soler sonatas appear from Larrocha’s Scarlatti/Soler recording, with a further two (tracks 18 and 19) from a recital of Spanish encores.

‘a quality of gentility [in the Scarlatti] … and the Soler is splendid’ Gramophone, December 1981, Scarlatti & Soler sonatas

‘vivid contrasts of dynamics, colour and touch, plus quite a show of bravura in the famous concluding Harmonious Blacksmith Variations’ Gramophone, September 1987, Handel

‘On the up-tempo Scarlatti, and on the Handel with its famous Harmonious Blacksmith variations, Larrocha is bright and clear’ Fanfare