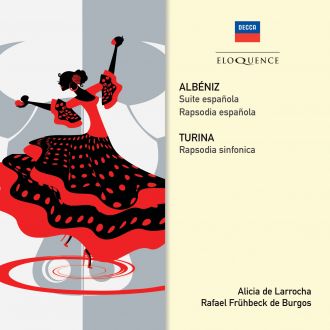 Both the Albéniz works on this recording began life as piano pieces – the Suite española for solo piano (here orchestrated by Rafael Frühbeck de Burgos) and the Rapsodia española for two pianos, orchestrated by Cristobal Halffter. They are given immensely colourful performances here, in glorious ‘Decca Sound’, with Burgos’s 1967 recording of the Suite española still considered one of Decca’s demonstration records. Both the Rhapsodies are scored for piano and orchestra, and who better to demonstrate them than Alicia de Larrocha. This reissue forms part of a survey of her much-praised Decca recordings, some of them appearing on CD for the first time.

‘the sound of this Decca CD is quite superb … the strings are sensuously lustrous … Detail is remarkable but always presented within a believable ambience and the performances seem to gain extra life and spotaneity’ Gramophone, October 1984, on Rapsodia española, Rapsodia sinfonica