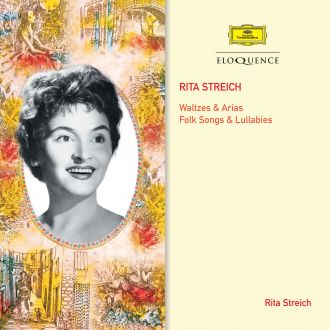 Rita Streich, famed for her peerless coloratura, for her Queen of the Night and her performances of Olympia in Les contes d’Hoffmann and Blonde in Die Entführung aus dem Serail, Rita Streich, often dubbed a ‘singing nightingale’ also took time out from a busy career to record miniatures. Several LPs, combined over two (now deleted) Deutsche Grammophon ‘Originals’ are here combined into a 2CD set, showcasing the soprano in popular opera arias, waltz-songs, folk songs (English, American, Russian, Japanese and Yiddish) and lullabies. The waltzes stem from the melodic treasury of the Viennese Strauss dynasty – music of yearning, enchantment and nostalgia, all abetted by Streich’s joyous coloratura. The folk songs and lullabies were recorded in Munich and in Regensburg, in 1962 and 1964. Note-writer Bernhard Uske, describes the result as ‘a glorious carpet of flowers’.


‘she has the rare gift of being able to sing bon-bons with a complete and captivating charm … sparkling fireworks (Meyerbeer) … the most beautiful control (Saint-Saëns) … ravishingly spun tone (Godard) … the recording is outstandingly good throughout with plenty of depth and a pleasing acoustic’ Stereo Record Guide on CD1: 1–8

‘like a bird on the wing, crystal-clear, astounding in its virtuosity … sings with absolute naturalness, with the utmost ease and a completely unforced intimacy’ Opéra International

‘a voice so bright that an inner light radiates in her singing, Streich is pure pleasure to listen to … Highly recommended’ Fanfare (Folk Songs and Lullabies)

‘Her voice was absolutely faultless: a ravishingly beautiful and pure tone, produced with perfect breath support and absolute evenness from bottom to top, with dead-on intonation and completely secure high notes free from any shrillness. This was allied to an interpretive art that was vivacious and yet always in perfectly good taste, able to pull out the stops for effect without falling prey to vulgarity’ Fanfare (Waltzes & Arias)