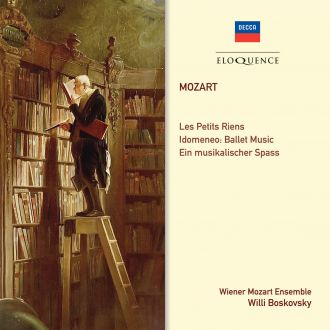 Concertos, symphonies, operas … sonatas, serenades and divertimenti. But Mozart and Ballet Music? Truly a rarity! Much of the music on this disc formed the tenth and last LP in Decca’s complete Dances and Marches series with the Wiener Mozart Ensemble under Willi Boskovsky for which he chose younger players, some of whom had not yet graduated to the Vienna Philharmonic. The leader was Friedrich Staar, a member of the Weller Quartet, but Boskovsky occasionally appropriated a solo – he plays the comical cadenza in A Musical Joke. The original recording consisted of Les Petits Riens and Idomeneo music and is here filled out with the Rondo, KV 371 and A Musical Joke. Both, the Idomeneo ballet music and march, and the little Rondo appear on CD for the first time. Tully Potter provides the fascinating annotations and the original LP covers from which

‘The horn playing excels itself in the Rondo: Roland Berger proves himself an excellent player indeed … an excellent disc’ Gramophone, February 1968, on KV 371

‘This is Boskovsky and his ensemble at their best: light of touch, sensitive in phrasing, and above all, full of style’ Gramophone, February 1971, on A Musical Joke