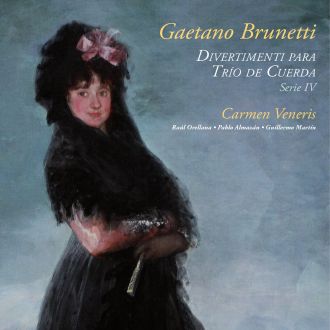 Gaetano Brunetti (Fano, ca. 1744 – Colmenar de Oreja, 16 December 1798) was one of a number of Italian musicians who moved to Spain in the 18th century in order to make their living there, musicians such as Farinelli, Corselli or Scarlatti. In fact, during the 1760s the number of Italian musicians living in Madrid included Luigi Boccherini, Domenico (Domingo) Porreti, and most of the violinists in the Royal Chapel, among whom we find instrumentalists such as Francesco Landini, Felipe Sabatini, Antonio Marquesini or Brunetti.
What makes the 23 divertimenti for violin, viola and cello all the more rare is the fact that there is no extant copy in the Palacio Real in Madrid. It is also interesting to note that Brunetti only wrote five pieces for the fourth and last series of divertimenti, because up to the end of his life he always composed in groups of six. Although we can’t be one- hundred percent certain, since there is no indication of any music missing from the manuscript, we can only assume
that divertimento Sexto was actually composed but was lost at some later point in time. In this case the series would simply be incomplete. There are other examples of this kind of lack of symmetry, such as Luigi Boccherini’s five quintets op. 49 for two cellos (G. 365-369), but this is most certainly an exception to the rule.
The five Divertimenti L. 145-149 were written in 1784 and are the fourth series of pieces the composer wrote for string trio: violin, viola and cello. The three earlier sets date from a very short period of time, between 1772-1774. After the fourth series Brunetti didn’t write any more music for this combination of instruments: he only wrote a collection of six trios “a due violini e violoncello” around 1794.

Carmen Veneris was founded in the year 2005 by Guillermo Martín and Pablo Almazán as a result of their interest in the research, recuperation and interpretation of the Spanish and European musical heritage of the 17th and 18th centuries with period instruments. Many musicians have collaborated with the group up until now, all trained in prestigious conservatories and European music schools, and with broad professional careers behind them. Although they at first spanned various types of chamber ensembles, at present they focus exclusively on chamber music written for string instruments. (Trios, quartets, quintets, etc.). Since its founding, the group has been invited to play at prestigious events and European music festivals (Early Music Festival l’Abayye aux Dames in Saintes, Kammermusiksaal Berlin, International Handel Academy in Karlsruhe, Early Music Festival in Seville, etc.) and has received critical acclaim for its choice of repertory as well as for the delicacy of the sound in its imaginative performances. The group has carried out a range of recordings with works by T. Giordani, J. F. Tapray, F. Devienne and J. C. F. Bach, as well as the String Quartets by Gaetano Brunetti, both for the label Lindoro.