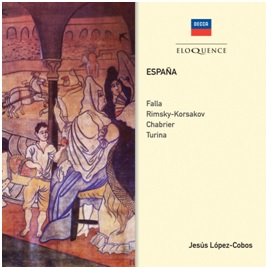 Jesús López-Cobos’s scintillating and sonically thrilling Decca recordings of Spanish music are here represented with music both Spanish and Spanish-influenced. Scenes and Dances from Falla’s The Three-Cornered Hat, Chabrier’s picture-postcard essay España and two works by Turina (one meditative, the other more extrovert) form the Spanish contingent of this orchestral recital, while Rimsky-Korsakov’s technicolour Capriccio espagnol is representative of one of many non-Spanish composers so influenced by the sights and sounds of Spain. The Falla appears internationally on CD for the first time.