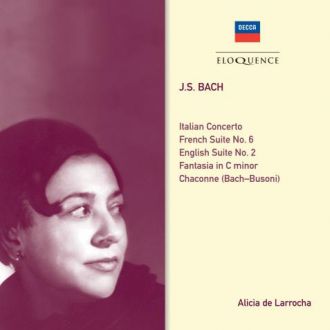 This collection includes all of Alicia de Larrocha’s analogue Bach solo recordings for Decca. Two suites and the Italian Concerto form the backbone of this release, but there are also three Bach transcriptions – two by Harriet Cohen, and the mighty Chaconne by Busoni (the 1973 recording; Larrocha recorded it a second time in 1986). These are jaunty and genial performances, beautifully shaped and with ease and nimbleness of fingerwork. But when epic grandeur and Romantic sonorities are called for, such as in the Bach–Busoni Chaconne, Larrocha unleashes playing of epic proportions. This release forms part of an on-going series of Alicia de Larrocha’s Decca recordings, with those of the English Suite No. 2 and the C minor Fantasia appearing on CD for the first time.

‘the resilience of Alicia de Larrocha’s playing [in the Italian Concerto] is most attractive, and her instrument’s sustaining capacity is an asset in the vocally inflected melody of the Andante, where she attains considerable intimacy of expression. […] The recording quality is up to Decca’s usual high standard.’ Gramophone (October 1972)

‘To prove how her tiny hands could make colossal sounds without banging, listen to her pull out the Bach/Busoni Chaconne’s virtuoso stops and still manage to draw attention to the music rather than to the pianist.’ Classics Today