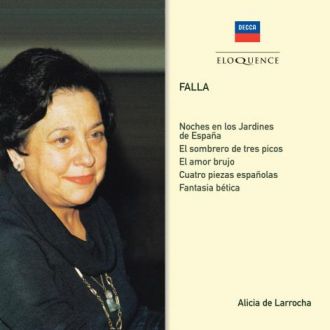 Although she never liked being pigeon-holed as a Spanish piano music specialist, Alicia de Larrocha was supreme in the music of her country. This CD brings together all of the solo piano recordings of music by Falla she made for Decca in 1973, together with her first (1970) of two recordings of Nights in the gardens of Spain. The recital includes transcriptions of works better known in orchestral guise – El sombrero de tres picos and El amor brujo, the suite of Four Spanish Pieces and the big Fantasia bética.

‘What to say of Alicia de Larrocha in music such as this? Only, I think, that one cannot imagine it more idiomatically and imaginatively played … In Spanish music her playing has all the rhythmic verve, and the control, of Rubinstein at his best, and I cannot hear enough of her … Decca have recorded her well here, in all her warmth and colourfulness and with an attractive touch of haziness in the atmosphere around the sound.’ Gramophone (April 1975)