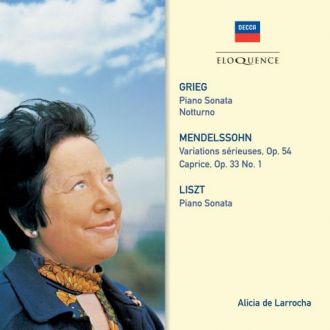 *FIRST INTERNATIONAL RELEASE ON CDAlicia de Larrocha’s magisterial, sonorous, even coruscating performance of Liszt’s B minor Sonata is here preceded by altogether more genteel repertoire from the 19th century – pairs of pieces by Grieg and Mendelssohn. A rarity – making its first appearance on CD internationally – is Grieg’s only solo piano sonata was written in eleven days at Rungsted, near Copenhagen, in June 1865 and published a year later. It is rarely performed or recorded today. Likewise, Mendelssohn’s A minor Caprice, dizzyingly despatched by Larrocha, is unfairly neglected The lovely ‘Notturno’, on the other hand, is one of Grieg’s best-known miniatures and likewise, Mendelssohn’s Variations sérieuses one of his best-known solo piano pieces.

‘[In the Liszt Sonata] she is illuminating often on matters of weight and touch (for example the rapid arpeggios in the first Agitato bit, also later); the fugue begins with splendid lightness and attack (the piano sound just about ideal here) … The recording is … indispensable listening for devotees of superior pianism’ Gramophone (April 1978)