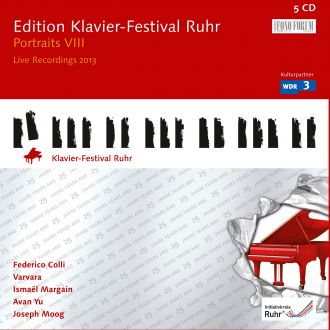 2013 the Ruhr Piano Festival was celebrating its 25th jubilee – a major success story; the festival is a major player on the festival scales of Europe if not the world, and this 5CD set is taken from there.

"One of our most fervent desires is to offer long-term support to young musicians as they embark on their international careers – for example, with our series of Portrait CDs. We launched the Edition Klavier-Festival Ruhr series of boxed sets in 2006. Now, with Volume 32, we are releasing our 8th boxed set of young pianist portraits containing our 46th Portrait CD – which is also the 100th CD in the entire collection! Thus,in Portrait Box VIII, we are proud to present five young pianists, all of whom gave their début performance at the Ruhr Piano Festival in 2013. Each one of them displays a unique, personal style…" (Foreword of the festival Director).

In 2012, Varvara Nepomnyashchaya – whose artist name is simply Varvara – won the renowned 12th Géza Anda Competition in Zurich,along with that edition’s Mozart Prize and the Audience Prize.

Avan Yu belongs to a new generation of young, cosmopolitan artists who navigate among many different cultures and continents as a
matter of course, giving concerts all over the world. In 2012 he won the Gold Medal at the Sydney International Piano Competition, along with seven further prizes.

Ismaël Margain was awarded the Audience Prize along with Third Prize (no first prize awarded) at the renowned Paris Long-Thibaud Competition in 2012.