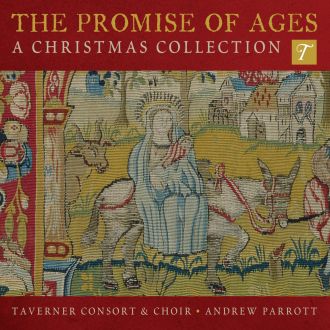 The Promise of Ages: A Christmas Collection

Andrew Parrott’s and his Taverner Consort & Choir’s timeless collection of Christmas music, The Promise of Ages, spans seven decades of holiday melodies both devotional and festive, including traditional carols from the British Isles, Medieval chants and Renaissance hymns, and the responses of 20th century composers to ancient seasonal poetry. not final cover art Seemlessly melding religious with secular texts, and high art music with  folk traditions, this reissue includes such favorites as the traditional Deck the Hall arranged for solo Welsh harp, There is No Rose from Britten’s A Ceremony of Carols as well as the popular 15th-century setting, and I Wonder as I Wander intoned by Emily Van Evera’s beautifully pure soprano. There are also plenty of delights and discoveries in this enduring and exquisite collection of holiday fare.