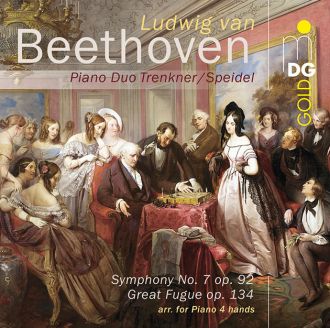 On the “Manfred Bürki” Steinway concert grand, built in 1901 and today a piano legend, the Trenkner-Speidel Piano Duo presents Ludwig van Beethoven’s Seventh Symphony in the interpretation by Xaver Schwarwenka, who must have been waiting for such a perfect instrument for his progressive and opulent piano texture. Moreover, this CD presents Beethoven’s own arrangement of the Great Fugue. With boundless energy Evelinde Trenkner and Sontraud Speidel celebrate an enthralling and stirring Beethoven festival.

As a composer and a musician respected as the world’s leading piano virtuoso of the nineteenth century, Xaver Scharwenka knew precisely how to reach the public.

The Great Fugue, one of Beethoven’s last works, poses many a riddle. The master must have had realized this because he penned the version for piano four hands on his own.

Evelinde Trenkner and Sontraud Speidel number among the few piano duos who are at all able to endow such intricate scores with musical life. The two women even resort to artistic moves (they have to play some passages while standing – since otherwise their hands and arms would become entangled!), which is possible only because of their many years as a team and the mutual trust they have developed.