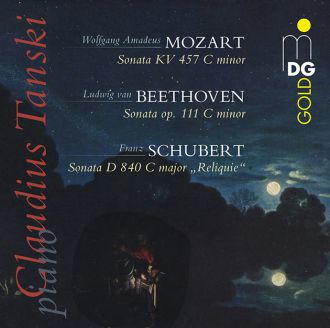 Summit Meeting
Claudius Tanski, a piano magician with a fine-tuned touch, has chosen a very personal theme for his newest recital: three sonatas in C, all of them from the towering heights of the piano literature, have been brought into fascinating interrelation. Since Mozart’s C minor sonata, Beethoven’s op. 111, and Schubert’s “Reliquie” occupy such a unique place in the overall oeuvre of their creators, this eight- thousand-meters-plus experience has to be experienced at a high altitude – on a 3-D recording in original MDG 2 2 2 sound on a Super Audio CD.

Rapid Climb
Mozart composed a mere two sonatas in minor keys, and the one in C minor is something very special. The opening triad shoots up like a rocket, and until the coda of the first movement (for him a quite lengthy ending) he essentially limits himself to it. In the middle movement, in a clearly lighter E flat major, the Viennese whiz travels all around the circle of fifths; to A flat major, of course, but the tonal spectrum extends even to the extremely unusual key of G flat major, before the initial C minor gains dominance in the finale, charged with energy and marked by rhythmic syncopation.

Musical Milestone
Beethoven’s Piano Sonata op. 111, his last such work, points far into the musical future. Even its beginning makes us prick up our ears: Is this manly muscular statement really still Viennese classicism? Or isn’t Franz Liszt already peering around the corner? It is not without reason that great artists like Thomas Mann have occupied themselves with what is music literature’s most enigmatic milestone. The concluding second movement is especially remarkable: the grand master of motivic elaboration increasingly condenses the “Arietta” theme until all that remains is a never-ending trill chain in many voices – an immense challenge for all pianists and mastered by Claudius Tanski on the “Manfred Bürki” Steinway D from 1901 with sovereign skill and a flawless feel for the smallest tonal nuances.

Peak Performance
Since Franz Schubert did not finish his Sonata in C, it later came to be known as the “Reliquie.” Its extant parts do complete justice to this designation and have tempted some composers and pianists to try to complete it. Claudius Tanski has taken a different route: he lets the impressive fragment speak for itself, fully conscious of the complexity of final movements in Schubert’s late oeuvre, again coming into view in the “Reliquie” but then not carried on to completion. Did the composer have his scruples about taking the next step? Tanski leaves this question open in free playing engaging the imagination of listeners captivated by this Super Audio CD produced in the finest MDG quality.