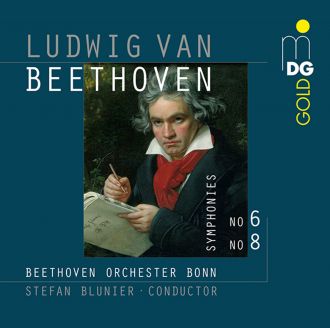 Six Eight
The Beethoven Orchestra of Bonn continues its brilliant Beethoven cycle with the master’s sixth and eighth symphonies. And once again the musicians from this musical Titan’s birthplace, performing under Stefan Blunier’s demanding baton, present an enthralling interpretation that need not fear comparison with legendary recordings. The BOB’s recording of the first and fifth symphonies was a gigantic success, and the orchestra’s fans can be certain of one fact: things will continue on this note!

Thunder and Lightning
“More expression of feeling than painting”: this is what Beethoven wrote of what became his extremely popular sixth symphony, the work known as the “Pastoral Symphony.” Nevertheless, the illustrative element gets its fair share: the brook babbles, the little birds sing, and the famous storm music of the fourth movement in particular meets all the requirements of dramatic tone painting. Lightning flashes out of the menacing rumbling, and the trombones and timpani suddenly entering with an enormous blast produce booming thunder that only slowly retreats into the distance. The carefree mirth of the last movement with its idyllic “Song of the Shepherds” seems all the more reconciliatory.

Clockwork and Clownish Wit
Prior to the sixth symphony, the Bonn musicians open the program with a rendering of the eighth symphony making us sit up and listen from the very start. One only rarely hears the animated initial theme performed so rousingly as it is here. The idea that Beethoven
had Mälzel, the inventor of the metronome, in mind in the second movement belongs to the realm of legend; if true, it would be a particularly delightful tribute to him – for here, by way of exception, the master of symphonic drama displays his humorous side. It is with audible pleasure that Stefan Blunier celebrates the contrasts between clockwork precision and harlequinesque dynamic oppositions.

Two x Three
Needless to say, the newest Bonn production has been recorded with the finest SACD technology. In MDG’s characteristic 2 2 2 format the tone paintings of the “Pastoral” appear in refreshing clarity and diaphanous transparency; the three-dimensional sound picture produces an uncommonly suggestive plasticity – an experience of nature that is verisimilarly real.