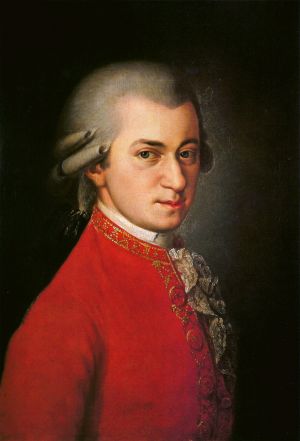 Wolfgang Amadeus Mozart, whose actual name is Joannes Chrysotomus Wolfgangus Theophilus Mozart, was a composer, pianist, violinist and conductor from the classical period, born in Salzburg. Mozart was a child prodigy. Already competent on keyboard and violin, he composed from the age of five and performed before European royalty. Along with Johann Sebastian Bach and Ludwig van Beethoven, Mozart is considered to be one of the most influential composers of all of music's history. Within the classical tradition, he was able to develop new musical concepts which left an everlasting impression on all the composers that came after him. Together with Joseph Haydn and Ludwig van Beethoven he is part of the First Viennese School.

At 17, Mozart was engaged as a musician at the Salzburg court, but grew restless and traveled in search of a better position. From 1763 he traveled with his family through all of Europe for three years and from 1769 he traveled to Italy and France with his father Leopold after which he took residence in Paris. On July 3rd, 1778, his mother passed away and after a short stay in Munich with the Weber family, his father urged him to return to Salzburg, where he was once again hired by the Bishop.

While visiting Vienna in 1781, he was dismissed from his Salzburg position. He chose to stay in the capital, where he achieved fame but little financial security. During his final years in Vienna, he composed many of his best-known symphonies, concertos, and operas, and portions of the Requiem, which was largely unfinished at the time of his death.