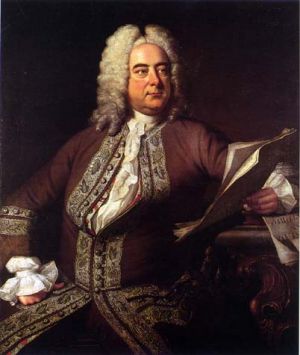 Georg Frideric Handel was a composer from the Baroque period. Handel wrote primarily music-dramatic works: 42 operas, 29 oratorios, more than 120 cantatas, trios and duets, which comes to a total amount of almost 2000 arias! Furthermore, he composed English, Italian and Latin sacred music, serenades and odes. Among his instrumental music are several organ concertos, concerti grossi, overtures, oboe sonatas and violinsonates, along with many solo works for harpsichord and organ.

Together with Johann Sebastian Bach, who was born in the same year (1685), Handel is viewed as one of the greatest composers of his time. He was extremely prolific and wrote in total more than 610 works, many of which are still performed today.

Compared to his contemporaries Bach, Telemann and Scarlatti, Handel was by far the most cosmopolitan. When Handel was a child, his father, who was a surgeon at the court of Saxe-Weissenfels, imagined a juridical career for him. But his musical talents did not go unnoticed at the court, which forced the father to let him study music. In Hamburg, Handel befriended Mattheson. Together they visited Buxtehude, the greatest organ player of his time, in 1703 (two years before Bach did). At that time, Handel was already an excellent musician, but it wasn't until his stay in Italy - the land of opera - that his talents and skills truly started to flourish.

Back in Germany, he received a position at the court of Hannover, where the noblemen had a connection to the British throne. Thanks to these connections, Handel decided to move to London, after which a puzzling history of intrigues and political games started. For example, it is unclear what the exact political message of his famous Water Music is, which was composed for a boat ride on the river Thames by King George. Initially, Handel focused on Italian opera during his stay in London, but from the 1730s onwards he started composing English spoken oratorios, with the celebrated Messiah at its peak.