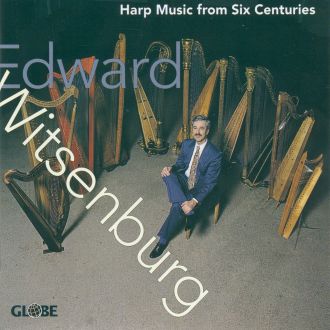 An exceptional and unique album with music for solo harp ranging from the Middle Ages to today, performed on the instruments for which the compositions (many of them world premiere recordings!) were written! All of them are performed by Edward Witsenburg, who is considered to be one of the leading harpists in the world.

In 1965, Edward Witsenburg gave up all orchestral work in order to devote himself to solo playing, chamber music, and the pedagogics of harp playing. He educated several generations of successful young harpists and was rewarded with a professorate at the Salzburg Mozarteum. Since 1967 he has regularly been teaching harp courses in Wales, and in other countries too he is regarded as a key figure in that respect. In February 1995, for instance, he gave master classes and lectures in Australia; he also regularly gives lecture recitals where he demonstrates a selection of harps from his own collection of instruments which ranges from the Middle Ages until the present day.

From 1975 until 1981, Edward Witsenburg, at the request of Nikolaus Harnoncourt, cooperated in the Monteverdi performances at the Opernhaus in Zurich, which became events of international importance. Further cooperation with Harnoncourt resulted in - to mention just a few - performances of Handel's opera Giulio Cesare in Vienna, Monteverdi's L'Incoronazione di Poppea at the Festspiele in Salzburg, Haydn's L'Anima del Filosofo, also in Vienna, and a memorable historical performance of Mozart's Concerto for flute and harp in Graz.

Apart from his interpretative and technical qualities Edward Witsenburg is also known to music lovers for his powerful tone, and with this last virtue he carries on the tradition handed to him by the late Dutch harpist Rosa Spier.