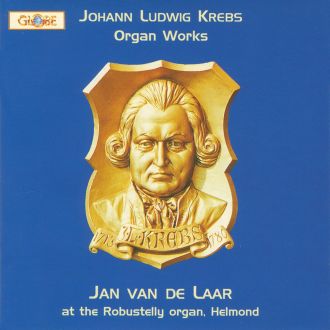 Johann Ludwig Krebs was the star-pupil or Johann Sebastian Bach and one of the greatest 18th century organ composers. Even more than Bach's own sons, he continued the Baroque tradition in his many works for solo organ, thereby creating several master pieces on the same level as the works of his great teacher. Although Krebs' works are very popular with the organ public and are being played all the time in organ recitals, there are not many recordings of these works and certainly none that sound better or offer more idiomatic and inspired performances!

Jan van de Laar, born in Helmond In 1955, studied organ and harpsichord at the Conservatory or Utrecht with Kees van Hooten and Leni van der Lee. In 1978, he finished his organ studies and in 1982 those of the harpsichord. In 1986, he also obtained his degree for piano. He followed interpretation courses with Anton Hellier, Ewald Kooiman, Allan Curtis and William Christie.

In 1976, Jan van de Laar was appointed organist of the Church of St. Lambertus in Helmond. He made many recordings for Dutch radio and the BBC and also recorded the third part or Bach's Klavierübung on the Robustelly organ in Helmond. He regurlarly appears as soloist and accompanist In the Netherlands as well as abroad.