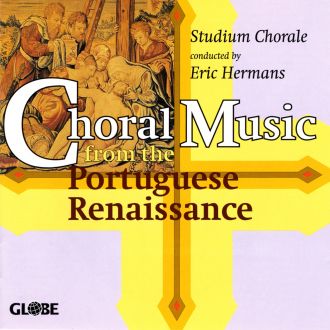 Choral Music from the Portugese Renaissance

The chamber choir Studium Chorale was founded in 1972, when a number of students at the Maastricht Conservatory found themsevles united in their enthusiasm for high quality choral singing from different stylistic periods. Initially, the choir sang mainly Renaissance and Baroque music. They followed specialisted courses and worked with a number of guest conductors among whom Jan Boeke, Frans Moonen, Philippe Herreweghe and Paul van Nevel.

Between 1981 and 1987 Studium Chorale took an intensive interest in contemporary music, stimulated by several new compositions dedicated to the choir. Since 1987, the choir has been building up its repertoire to the broad spectrum of five centuries of choral culture it now covers. The men of Studium Chorale form a separate Schola for Gregorian chant, and they made an intensive study of the MSS of Sankt Glaaen, Laon and Einsiedeln. Eric Hermans studied in Frankfurt with the famous choir director Kurt Thomas. He specialised in early music performance practice through courses at the Foundation for Performance Practice at the Department of Music at Utrecht University, and went to professor A. Kurris, Maastricht for tuition in Gregorian chant. Besides being a conductor and singing teacher, Eric Hermans had a long-lasting connection with the Maastricht Drama Academy and the Antwerp Conservatory where he taught voice production and text expression. His highly personal ideas about text experience and the special relationship he advocates between speaking and singing, language and music, are the inspiration of his musical interpretations.