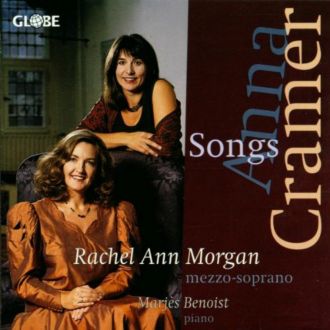 Mezzo-soprano Rachel Ann Morgan was born in Cardiff, Wales, where she began to play the harp at the age of nine. She read Music at Bristol University, then came to The Netherlands to study the harp with Edward Witsenburg at the Royal Conservatory in The Hague. She also studied singing at the Conservatory with Sophia van Sante. After five years as principal harpist of The Netherlands Ballet Orchestra she joined the Opera Studio of The Netherlands Opera as a mezzo-soprano. She is an opera and concert singer as well as a recitalist and gives concerts accompanying herself on the concert harp as well as the Celtic harp. She has performed in Britain, Germany, France, Belgium, Italy, Spain, Sweden, Russia, America and The Netherlands where she now lives. She has made several albums, including two solo discs of Celtic folksongs accompanying herself on the Celtic harp for Etcetera and has sung the title-role in Purcell's Dido and Aeneas for Globe. In 1994, she was made an Officer of the British Empire (OBE) for her services to British cultural interests in The Netherlands.

Pianist Marjes Benoist was born in Velp, near Arnhem, where she began to play the piano at the age of ten. She studied at the Amsterdam Sweelinck Conservatory with Jan Ode, in Rome with Guido Agosti, was granted the Jacques Vonk Prize and received scholarships which enabled her to continue her studies with Alicia de Larrocba in Santiago de Compostela and at the Tchaikovsky Conservatory in Moscow where Yevgeni Moguilovksi was her principal teacher. She took part in various music theater productions by Mauricio Kagel and Louis Andriessen among many others, and also performed works by several avant garde composers. As soloist and chamber music player she frequently appears in France, Russia, Germany, Spain, England and Italy as well as in her native country.