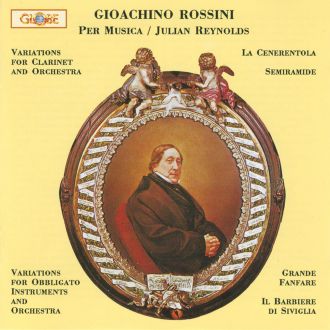 Variations for Clarinet and Orchestra a.o.

The European Chamber Orchestra PER MUSICA was founded in 1983 and consisted of then current and former members of the European Youth Orchestra, who wished to continue playing together and giving concerts regularly. The orchestra made its debut in London in 1983 and performed in various festivals and tours in France, Holland, the UK, Italy and Germany. They also worked with well-known musicians such as Frans Brüggen, Radu Lupu, Matislav Rostropovich, Heinz Holliger, Luciano Pavarotti and Jene Anderson. Most of the members of this group of brilliant young musicians are winners of major prizes in national and international competitions. The Per Musica Orchestra was discontinued in 1986, shortly after their last and very succesful tour of Italy - a great many of its key members went on to accept major posts with international orchestras and there was no financial foundation for its existence on a regular basis.

Julian Reynolds is of Russian, German and English descent and was born in London in 1962. He received diplomas from the Royal College of Music and the Royal Academy of Music whilst still at school, and went on to take an honours degree in History, Musicology and Analysis at King's College London University. He gave his highly accalimed solo debut recital in the Wigmore Hall in London at the age of 19 and was a finalist in the 1984 Busoni Competition in Bolzano. From the age of 18, Julian Reynold became the pianist for the European Community Youth Orchestra for five consecutive seasons, where he graduated to assisting the conductors of the orchesra in particular Claudio Abbado. It was with the ECYO and ensembles from that orchestra that he made his first performance as a conductor. He was a co-founder of the European Chamber Orchestra Per Musica and with this orchestra he toured Europe extensively, appearing in major festivals in Italy (Pesaro, Bolzano), Switzerland, the Netherlands and England. In 1986, Julian Reynolds became assistent to the Music Director of the Netherlands Opera in Amsterdam, and he has since then combined his duties in the Amsterdam Music Theatre with many guest appearances with orchestras and opera companies in and outside the Netherlands. After conducting Verdi's La Traviata with the Kirov Opera in St. Petersburg in early 1991, he has been made a permanent guest conductor of the company, where specialised in Italian and Russian repertoire.