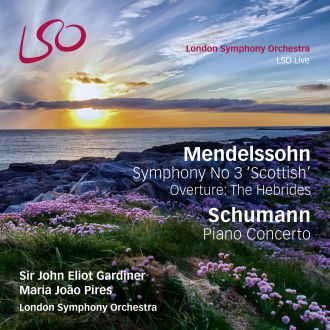 LSO Live presents the first in a series exploring the complete symphonies of Felix Mendelssohn under the baton of Sir John Eliot Gardiner. Also featured on this release is the eminent Portuguese pianist, Maria João Pires, in the inaugural concerto recording on the label.

Inspired by his travels to the British Isles and full of the influence of the rolling Scottish landscape, both Mendelssohn's Symphony No. 3 'Scottish' and his Hebrides Overture ('Fingal's Cave') are amongst the composer's most popular and celebrated works.

Sir John Eliot Gardiner writes of this coupling: 'Even if they spoke with different accents these genial Romantics were united in their ambitious fervour for 'abstract' music to be acknowledged as having the same expressive force as poetry, drama or the literary novel. The three works on this album exemplify the endeavour and range of invention of two of them, friends and colleagues in Leipzig.'

This recording will be released in both SACD and pure audio Blu-ray formats, allowing both the London Symphony Orchestra and Sir John Eliot's performance to be seen and heard to full effect.