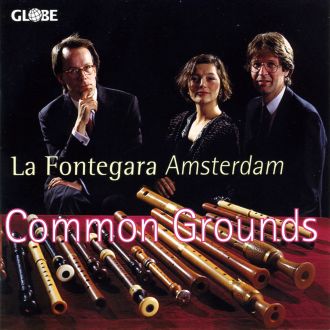 This album can be considered as an ode to the "added note", to the art of arranging and improvising, partly on the part of performers of long ago, partly of La Fontegara Amsterdam anno domino 1995: old music viewed with a contemporary eye.

La Fontegara Amsterdam was founded in 1979 and ever since the group's formation it has worked on and succeeded in developing a very individual and original style of performance, presentation and programming, never shying away from original arrangements and the use of theatrical effects. The three members of La Fontegara Amsterdam - Saskia Coolen, Peter Holtslag and Han Tol - are leaving their marks on the international concert stages as well as on the realm of recorder and early music pedagogy. There is also an increasing number of present-day composers writing new music for La Fontegara.

Saskia Coolen studied the recorder with Kees Boeke and Walter van Hauwe at the Amsterdam Sweelinck Con-servatory and read musicology at the University of Utrecht. She is also a member of Camerata Trajectina and an ensemble called Recorders which she co-founded herself.

Peter Holtslag was born in Amsterdam and studied recorder at the Conservatory of his native city. He is a well-known soloist who works with musicians such as William Christie, Andrew Parrott and Rene Jacobs. For his recording of Vivaldi recorder concertos (Hyperion) he was singled out by the Gramophone as 'a new recorder virtuoso with more imagination than some'. He is a teacher at the Royal Academy of Music, London, the Hochschule für Musik in Hamburg and gives summer classes at the Casa de Mateus in Portugal.

Han Tol also studied at the Sweelinck Conservatory in Amsterdam and was laureate of the Musica Antiqua Competition in Bruges in 1984. He recorded with the Leonhardt Consort, the Parley of Instruments, the Taverner Players and the Royal Concertgebouw Orchestra of Amsterdam. He also teaches at the Rotterdam Conservatory and at the Akademie für alte Musik in Bremen.